A downloadable game for Windows

Create an elaborate line of conveyors and furnaces to create alloys and make lot's of money, then use that money to make it even more elaborate.

Note: At the moment, the game's block prices aren't very balanced, and they can't really be yet. So if you want to skip the waiting around for money, press X to gain 100$

For updates on my projects, go to my twitter: https://twitter.com/Oliver_Bentzen

A really amazing game! Next step is to implement a save & load system...

I am really looking forward to see how it evolves!

Is there a way to upgrade the machines?

Yes, if you have the required resources collected (use the collector block) then you can just left click on it

Also, can you please make buildings be selectable with number keys? Or assign some keyboard keys to scroll through them. For example, my mouse wheel is broken, so it's a real pain to helplessly rotate it until the building that I want is finally randomly selected. (I know I am really just supposed to change my mouse, but still).)

The conveyors are a real choke points. They should probably be upgradable too. Like the faster ones in Factorio.

Thanks for the feedback!

On my machine it seems to work fine, however there are a couple of reasons i can think of that would cause it to not work:

I actually just implemented the number keys as block selection keys. So that's coming in the next update.

I was planning on doing this, but at the moment i can only make them even slower than they already are and make them upgradable to their current form. However i can slow everything else down as well as the conveyors and speed the game up and it would probably work. I haven't tested this yet so i'm not gonna promise anything.

I had produced about a thousand of tin, iron and copper, but they were not upgrading. Now that you mentioned that I might have actually needed alloy for that, which I wasn't producing atm, it makes sense. So yeah, probably a bell to change some sprites.

I can't provide a screenshot anymore, but what I've been doing - I was using a hub/array method. That is - a single conveyor belt is going around all of my drills, and comes to a furnace hub. There it splits with 3 layers of splitters into 27 threads, and after that they all come back on a single line, which goes elsewhere, splitting in 2 lines, which go to collector hub and seller hub of the same principle. And all that brilliant design didn't work, because furnaces were almost empty. I believe, splitters work on a tick system, same as furnaces, and furnaces have a whole lot less that 27 ticks to do their thing, which means that such splitter can never fill the demand of furnaces, as it is not transfering items asap. So, I had to split my drill lines into 3 independent ones, removing the front splitter, which started to actually fill the queues past the second and third layers of splitters, but now I realised, that the output is not working, as the single line collecting all the smelted bars just can't make it. Finally, I just had to remove all of that, and slap in a seller/collector/seller/collector right after each furnace, to make it both work smoothly and sell/collect about a half of each item I produced. But ultimately, the whole idea of hubs was just destroyed, as they are simply not working. Current best strat is simply make a 5 item line near each resuorce, which is: drill, conveyor, furnace, conveyor, seller/collector. Which is really not that elegant, and probably not what the game is supposed to be.

I like the game, though) It has so little tools and  resources, but you can really unfold it by using your imagination and creativity. That's how Minecraft started back in the days)

If there is any way you can make a screenshot later i would love to see it, as i can't quite picture it in my head. But I'm going to try to keep basically this entire post in mind as i move forward.

But yeah definitely gonna try and make those sprites a bit better, though i have a band aid implemented for 0.4 that makes it obvious what items you need (they're named both in the resource... tree? view? i don't know and in the upgrade menu). But yeah it was bronze you needed.

Game Dev Rant (i think?) Incoming, TL;DR I need to change a lot of things and rethink splitters to fix this but i am going to try. And hopefully it will work.

The biggest problem with your design (well actually the games design as i want people building interesting solution's like yours) is that it's 100% grid based. I can't change this fact but it's awkward to work around, and why belt's feel slow. In Factorio belts aren't quite grid based and thus can carry 3 more items. That and they're smaller than in Manufactory. which makes them much better in Factorio than in Manufactory.

The second biggest problem (or maybe this might actually effect it even more, i don't know) is that the whole game runs on a timer, meaning every block has a minimum amount of time they can do stuff in. Conveyors run every time the timer hits. Meaning they are the fastest thing in the game.

This effects splitters as it is literally impossible for them to move items at the rate they're supposed to (they won't fill lines unless you block off both exits. Which is obviously useless) because splitters need to be faster than conveyors, yet conveyors need to be faster than splitters to deliver the items, i also don't know how to use Factorio for reference in this case cause i have no idea how it works in Factorio, it's like magic. However the thing i mentioned before about making everything slower and speeding the game up would help solve a part of this, and a redesign would hopefully solve the rest. So i'm hoping that i can get this fixed quickly.

By the way was this rant too much or was it fine, should i just explain things simply or should i keep this complex explanations in (because i like doing them)

Can rebuild it using X, as the game has no saves yet)

So, this is a quick 9-thread furnace hub with 2 tiny seller/collector hubs. Just imagine it being 27 furnaces and 9+9 sellers+collectors. (Also, sellers and collectors are kinda slow, so this setup will not work particularly well. Especially if furnaces will later be upgraded. Perhaps, sellers and collectors should not be taking so many ticks to reactivate.) 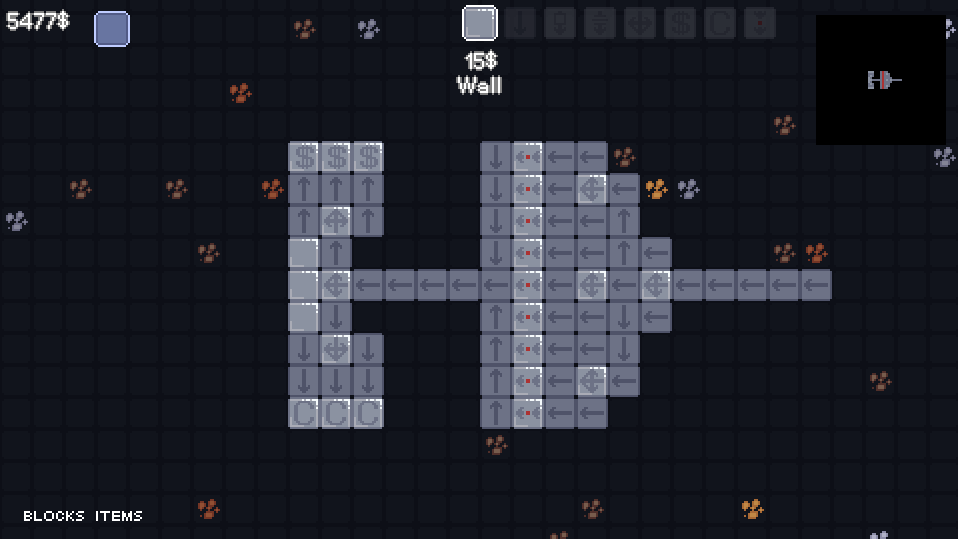 This is what I was forced to do: 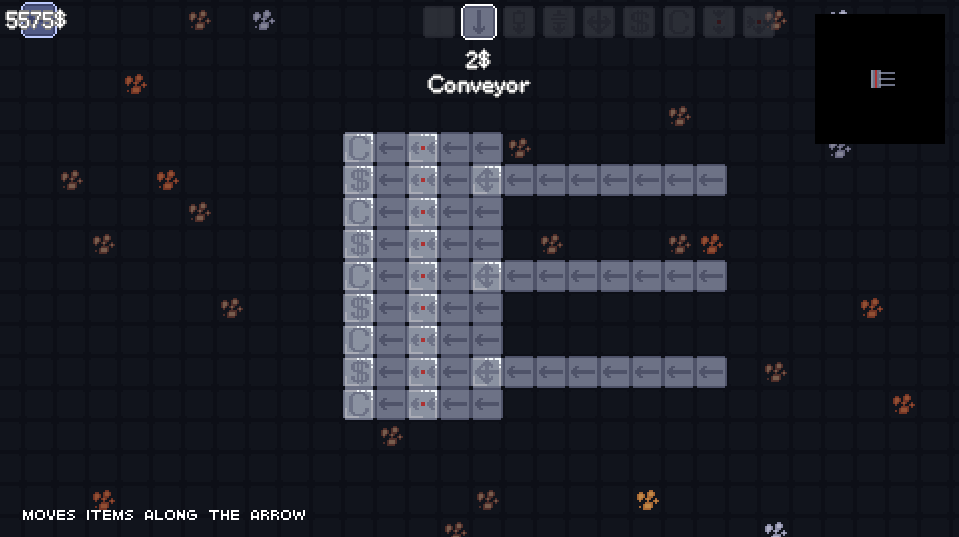 Couple of little touches may be to:

* make a scene with controls explanation, as I also failed to read the game description on itch, so I had to figure the controls by just trying all the keys (it also may be transformed in a remapping page later). Just basic info, maybe with a little art, but most important - in the actual game. 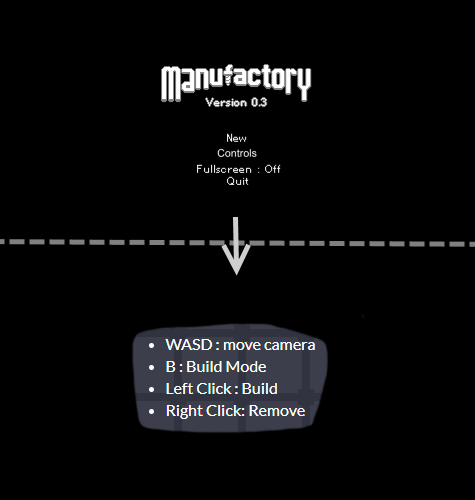 All other things I found to be quite explained.

Thank you for these images, they're gonna be extremely helpful. They've made me realize there are fundamental problems with the design of the game, so 0.4 might be a tad delayed or maybe 0.4 will be released more as a quality of life update and then 0.5 will be big update. Either way i will be attempting to redesign the game in whatever ways necessary to make it so more complex solutions = faster output (assuming they're not dumb)

I will temporarily shove the controls into the main menu, will probably move them later.

As for the resource orderings, they actually are consistent. Just in a weird way due to the adding and removing of items. And the upgrades are actually less consistent funnily enough. Though in practice they're definitely more consistent. Basically i don't really know what i want for the orderings here and I'm gonna change it many times probably.